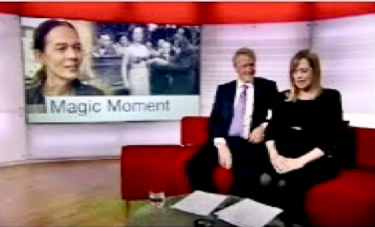 “My aim is to help and show people how to find positive resources and intentions by using one’s skills in obtaining the full potentiality that exists within our life. Through positive thinking and the Laws of Attraction, we can bring forward endless possibilities into our lives.

Gary has read the hands of thousands of people worldwide and from all occupations, backgrounds and nationalities.

Gary has been using his talent with palm reading for more than thirty years. He is a third-generation of palmists in his family. It goes back to a Celtic Ancestry in Scotland and Wales and in more recent times here in London, England, when his family became well known in the 1950s. Gary’s grandfather, uncle, and mother performed for BBC TV and Radio and theatres throughout Great Britain, with mind reading, escapology, illusionism, and palmistry. After reaching a certain amount of celebrity status, a tragedy had struck within the family.

Gary’s uncle Roy began performing mind reading with his father the Great Marlo, until he predicted his own death before going on stage at the Royal Worcester theatre Worcestershire at the age of sixteen. After a short period of time, Gary’s mother, Georgina, was trained and introduced by her father to perform mind reading at the age of fourteen. It followed with the Great Marlo and Georgina topping the bill at many theatres around England, Scotland, Ireland and Wales and becoming well-known with the BBC.

“As a child, my grandfather would occasionally try to help me to open my mind by creating greater awareness on the esoteric level. He used to do this by holding up playing cards and other types of cards with psychic symbols, testing me to reveal the answers on the reverse side. As I was so young, I did not appreciate what he was trying to achieve for me.

Although I strayed from esotericism for some time, a certain amount of awareness was always with me and carried within my DNA. Later on, in my life, my awareness grew. However, psychic awareness is not something you switch on or off like a tap.

I would watch my grandfather and mother when I was a child performing with Palmistry at different events. However, neither of them taught me the art of Palmistry. After many years of studying it and learning myself, I began to give sample readings when travelling the world. At a later date, I decided to go professional with Palmistry and have continued on that path ever since.

For some years, I was also ambitious as a singer, songwriter. I performed with my partner Denize at venues with our band ‘Awakening’. As time passed, I became interested in gaining qualifications in other skills that I could use to help people, which I have been doing to this day.

I am a professional Palmist and Tarot card consultant. A qualified Usui and Karuna Reiki Master Teacher, Reiki and Spiritual Healer, a clinical Hypnotherapist, NLP, EMDR, Past Life Regressionist, a trainer in the Law of Attraction, Teacher in meditation, and a published author of self-awareness books.’’

Gary has appeared on:

Gary has also had write-ups in local and national newspapers:

“Ever since I was a child, I have received dreams & premonitions that have taken place in waking life about friends, family and world issues. A dream that I had a few years ago had revealed itself. It was on the night that Jill Dando, the BBC News Reporter, was murdered. I dreamt that two police officers were holding me. I was saying to them, “It isn’t me you want; it is that guy, he’s getting away”, and then I pointed to the actual assassin making his escape.

I saw a small man with greased back black hair, throwing his gun into the river Thames, and then climbing into a car with another man sitting beside him. The dream told me that these men were from another country. A day or two later, I telephoned the police (which I have never done before) and mentioned my dream, as they were asking for information at the time. It is possible that they thought that I was quite mad! Until I told them which gun it was that shot her – A 9mm.

At this time, no information had been revealed to the public. When the police arrested me in the dream, it revealed that the police had got the wrong person, which happened in real life! The rest is history!”

*Write up in Metro Newspaper (over one million copies sold)

*Radio 4 Comedy Hour, live with a studio audience. Hosted by Marcus Brigstocke of ‘Have I Got News for You,’ and reading the hands of celebrity and comedian Phil Jupitus of ‘Never Mind the Buzzcocks and QI fame.’

*Write up in Spirit and Destiny magazine

*Talking about Health with Palmistry, on BBC Radio 4 news program – PM Interview with Presenter Eddy Mair and a Cambridge professor