Adventures of The Great Marlo & The Blue Pearl 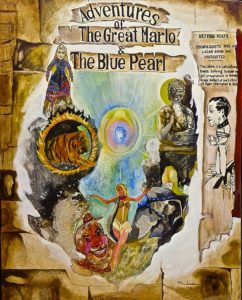 Adventures of The Great Marlo & The Blue Pearl

Deep below the surface of Buddha’s birthplace in Lumbini lies the sacred Buddha Stone, which holds the secret of the Blue Pearl! What is the secret that the Blue pearl possesses?

Fifty years after his story ends, David’s Grandson, Gary Markwick, is recounting his adventures to the world in an engrossing docu-fantasy novel. ‘Adventures of the Great Marlo & The Blue Pearl’ sends readers on a global journey where they will see David’s life inside the circus, through two World Wars, and later finding international fame with his daughter as ‘The Great Marlo and Georgina’ duo. On one hand it’s the gripping adventure of a race around the world to find the Blue Pearl. On another level it’s an entertaining biography of a 12-year-old boy who left home for the circus and wound up as one of the UK’s most famous and loved magicians of his generation.

In the ‘Adventures of The Great Marlo and The Blue Pearl’ Gary has opened up a ‘Pandora’s Box’ of delights. Journey with ‘The Great Marlo’, Marko the Magician and the many friends and foes they meet along the way, experience the thrills and spills of life on the edge as well as the spiritual enlightenment that comes to them. This is a book like no other you have read before, part documentary, part fantasy it manages to mix the two in a sympathetic and bold manner that leaves the reader hanging out for more.

The story unfolds, as seen through the eyes of David – ‘The Great Marlo’, who left his home in Edinburgh, Scotland at the age of 12 to join a travelling circus

Filled with mysticism and intrigue the great adventure unfolds, covering the period from the late 1800’s to the 1960’s and crossing the continents of India, USA, Canada and Europe. We see truth and enlightenment on a spiritual journey revealed before our eyes.

‘Adventures of The Great Marlo and The Blue Pearl’ is an edge-of-the-seat and uplifting new book that will serve up an abundance of wisdom, self-awareness, spiritual health and enlightenment.

David Galloway Lindsay later achieved fame as an escapologist (The British Houdini) a magician, a palmist, and a performer with mind reading skills. Working with his son Roy, and later with his daughter Georgina, he performed with the BBC and theatres around Great Britain, and some parts of the USA, going on to become famous as ‘The Great Marlo and Georgina’.

Signed copies of the book are available at Gary’s booth in Camden Lock and/or by post – email: gary@palmistryinhand.com